I'll be talking about swaps in a moment.  First though, my 9 patch is done!  Well, the top is done at least. 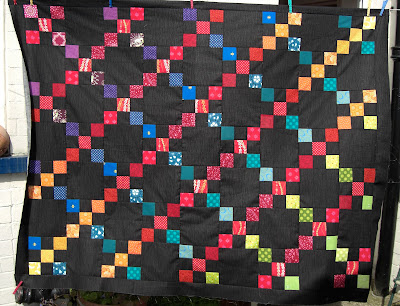 I did it in record time because I was enjoying it so much.  I learned some other valuable lessons too.  The big one is press it well!  Brioni laughed when she saw how badly I pressed it and then and did a proper job for me.  It looks much better now it lays flat!  I haven't decided how I am going to quilt it yet, but it will have to wait for a bit.  See, I have a shiny new project to work on!

Laura @ Needles, Pins, and Baking Tins was talking about the Brit Quilt Swap 3 over on Twitter.  After a bit of a conversation about it she convinced me not to be scared and sign up for it, so I did!  The swap is for a mini quilt between 12" and 24" square.  It's also a secret swap so you don't know who is sending to you.  The first thing you do is post a mosaic of things you like to give your prospective partner an idea of what to make for you.  You can see mine on an earlier post.  Then you wait anxiously to find out who your partner is and you stalk them!  I don't mean that literally of course.  You look at their mosaic and their Flickr page and their blog and finally come up with an idea.  Fortunately for me I had a pattern I drew ages ago when I had access to a CAD program and was working through some ideas with Brioni.  My pattern is called Insane Geese Posse. 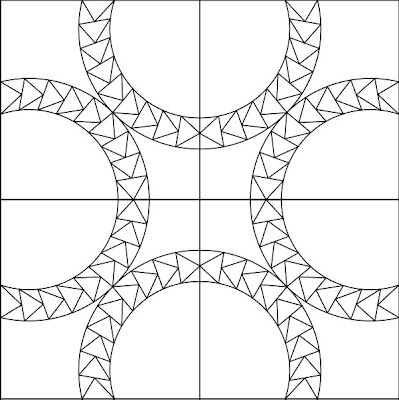 I posted this to Flickr and got some good comments.  Most thought I was crazy to do something so complicated for only my second project, but told me to go for it anyway!  After consulting with my in-house guru and raiding her stash I had a plan.  The way to do the flying geese on the curve is a technique called foundation paper piecing.  There are many tutorials out there if you Google it.

So I drew up my templates, cut my fabric and got on with it! 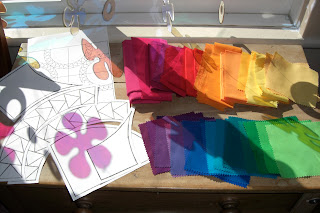 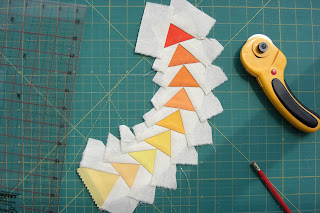 I found the process a bit fiddly.  Also having to get up and press each seam wore a bit thin until I set up a mini ironing board next to where I was sewing.  I think it's a fantastic technique.  It's magic!  I now have two of my 8 curves done. 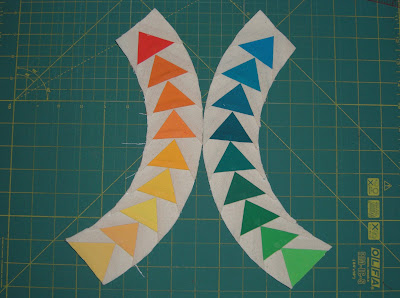 I hope my partner likes it! 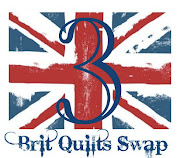